One of the harshest trends on social media these days is an assault on romantic preferences.  No, I’m not talking about someone getting upset because one guy loves another guy either.  No, I’m talking about the trend where some women post stuff like this: 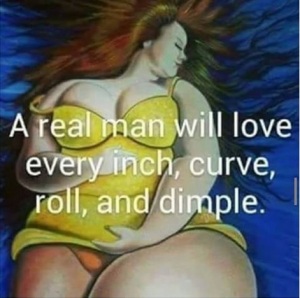 All three of these, and the legion of fellow memes, seek to do nothing more than to shame men into being romantically attracted to a particular type of woman.

In the first and last, attractive “curvy” women are presented as the ideal, contrasted in the last with an almost skeletal model.  It makes it clear that the “curvy” is to be preferred.

Personally, I agree that picture one and three have attractive models.  They’re beautiful women worthy of being appreciated as such.  However, who is really arguing about them?  Very few men wouldn’t look at these women as beautiful.

The reality is something else, which is illustrated in this incredibly harsh rebuttal.

Now, I won’t say that this is purely a “feminist” thing.  I’ve seen fairly conservative women share memes similar to the ones above.  However, the point remains, and that is these memes exist to try to shame men into being attracted to heavier women.

For the heavier women, I understand where they’re coming from.

They deserve to be appreciated for who they are and I understand why they don’t feel like they should have to change in order to get that appreciation.

However, there is also a fair bit of hypocrisy involved with many of these women.  They will share the above memes, then share their favorite beefcake pictures of Channing Tatum or, before his untimely death, Paul Walker.

On one hand, they are railing against an idealized version of women that they don’t feel they can attain, while at the same time perpetuating the same thing for men.

And make no mistake, men are often held to unobtainable standards as well.  For example:

I came up in the era of He-Man.  It’s generally impossible for a man to obtain this idealized image without subjecting his body to not just years of intense weight training, but often a fair amount of steroids.

Yet this has been deemed acceptable.

Here’s the thing, though.  Men are going to be attracted to whatever they happen to find attractive.  Some prefer bigger women, some prefer petite women.  For me, were I not married and looking for my ideal woman, she’d probably look something like this:

Two of those three are professional MMA fighters.  The first is a fitness model.  Frankly, that’s what I find attractive.

Should I be shamed for it?

Frankly, I won’t be shamed for it.  No man should be shamed for what he happens to find attractive.  Yes, guys will joke with one another over their preference of romantic partners, as they would no doubt rag me about my preferences.  However, joking and shaming are two very different acts.

Shaming is an attempt to force a change in behavior.  I won’t be shamed for my preferences, nor will I shame any man for his.  And make no mistake, there are men who are attracted to almost every body type.

The rules of attraction exist, but they vary from each and every man as to what rules they play by.  For some, it’s all about the breasts.  Others, it’s the butt.  For me, it’s the stomach of all things.  Still others just want a pretty face.

If this sound shallow to you, chill out.

Physical attraction often is.  Beauty is only skin deep, after all.  Attraction, however, is all we’re talking about.  I’m not about to advise someone to spend their life with someone who meet no other compatibility requirement other than being attractive.

However, that’s the topic for another day.

Tom is a husband, father, novelist, opinion writer, and former Navy Corpsman currently living in Georgia. He's also someone who has lost almost 60 pounds in a safe, sustainable way, so he knows what he's talking about. View all posts by Tom

One thought on “Rules of Attraction”